Construction of a clock face replica for grandmas clock.

The Faux-Emaille clock face was in bad shape. The clear plastic layer was separating from the paper layer below and badly stained. For the reconstruction the clock face was removed from the clock. The two layers were completely separated and then scanned using a flatbed scanner (the scans: layer 1 layer 2 ).

After digitally superimposing the scans and some cleanup, the result was traced in Inkscape. The resulting svg was printed on light, glossy paper using a Laserprinter.

To install the new face, the old paper layer was destructively removed from the metal plate. The three holes were cut in the newly printed paper. Then the paper was slightly wetted before glueing to improve wrapping the curved metal plate. After trimming the borders the new clock face received several coatings with a varnish spray and then was installed in the cleaned clock. 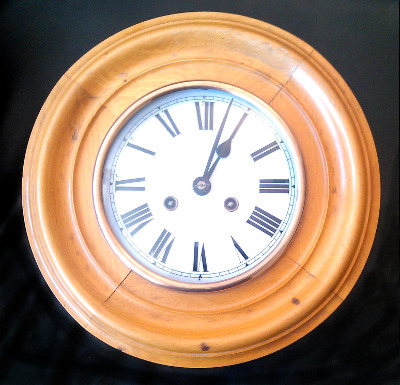